On May 9, 2022 at 345pm Springfield Police responded to a call for traffic lights out at Brookside Road and Springfield Road. As the officer arrived he saw an apartment on fire a block away. He called for the fire company. The officer was approached by a 12 year old resident who confirmed a hearing impaired older male was still in the building on the second floor. Springfield Fire Company along with Clifton Heights, Garretford-Drexel Hill and Collingdale responded. Springfield Fire had an engine on scene within 3 minutes and firefighters entered the building and removed the male. He was treated at the scene by EMS. The fire was confined to the living room in the first floor apartment. Companies were on scene for about an hour and 30 minutes. We want to thank Manoa and Aston fire companies for covering the township while we operated at the scene. The cause of the fire is under investigation by the township fire marshal. 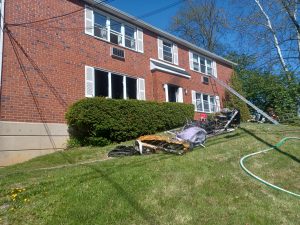